The trial company said they would not allow anything over a 2 week extension. That meant I would have to get a new blood draw, get the results back, get an MRI, meet with my doctor, and do another neuro exam by another blind doctor before starting the trial by the 29th. The first response was that it couldn’t be done. I wasn’t okay with leaving it at that without trying. I was told to wait and see what could be done.

After pushing and questioning, they were able to piece it together to at least give me a shot. My blood draw was yesterday and then it was yet another waiting game.

It wasn’t until late this afternoon that I finally got a phone call.

I’m 52! Of the multiple liver tests that they look at, the one that mattered is 52. While normal range is 3 – 34, the trial’s cut off is twice the normal limit. 68 was the magic number to get below and I made it! 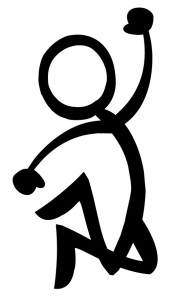 I’m still above normal so I still need to be aware but I’m getting there. Soon I can rejoin the land of normal functioning livers.

I go for my MRI on Friday morning, see doctors either Tuesday afternoon or Wednesday morning, and start my baseline visit on Wednesday. I’ve never been so happy to get poked and prodded.

Thank you everyone for all of your kind words, thoughts and prayers, and listening ears as I have stumbled through this process. I have gone on an emotional roller coaster and I’m sure I’m no where near finished. I really am grateful for such an awesome support system I have. It’s good to know I can both celebrate and cry among friends.

And so the story goes… I’m once again in limbo land.

I got the call with my results once again. It’s not a good sign when they don’t leave a message on the first call. I’m still too high. This time I got the actual numbers and I’m amazed I am still functioning with how high my first numbers were.

At this point I’m at the end of the window for the trial. We’re going to see if they will grant an extension but I have no idea what the chances are for that to happen.

I know that I didn’t get my MRI this morning and I have an appointment scheduled for Tuesday to talk about other options. I know that I’m very depressed and frustrated. I know that it’s all out of my control now and that’s scary.

So for now I wait and pray.

Thank you everyone who has been thinking and praying for me. It means a lot. It’s awesome to know I have so many people around me who care.

And most importantly, thanks for letting me vent and be the sad panda I am lately. I can only hope it will get better soon. 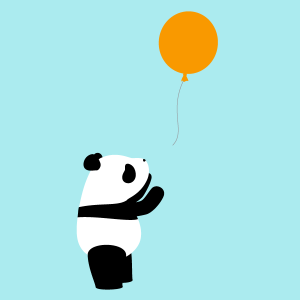 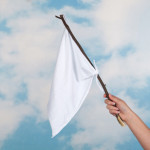 A large part of me is ready to just wave the white flag. I’m having another pity party over my brain and it’s frustrating because most of the world doesn’t even think about their brain.

My last regularly scheduled MRI showed new holes. That meant that my drugs weren’t working. The doctor of course said we could have a few options – stay with the current meds and hope it was flukes or find something new. I was more than okay switching because I would get horrible flushing every time.

So it was time to figure out what to do next. I again had a few options.

-One drug is an injection once again. While injections aren’t my favorite, I would have been okay with it except for the fact that this one has a fun side effect of messing with eyes, of which I have already had issues and so could and probably would be more prone to bonus eye issues. Seeing is kind of nice.

-The next choice was an infusion once a month. I liked the once a month part but this one has a high rate of giving an incurable brain infection if you are JCV positive. I, of course, am slightly positive and rather like my brain without deadly infections.

-The last option was a trial drug option starting in a few months. This one is on its last leg of trials and is thought to be FDA approved shortly after this trial. It’s an infusion once every six months, along with some vaccines (it’s what they are actually testing in this trial.)

I was up for the challenge and opted for the trial option. It had the bonus of being paid for and the lure of only every six months sounded too good to be true. To qualify for the trial I had to be off of my current pills for so many weeks. That wasn’t going to be a problem. Because I wouldn’t be taking those anymore, the doctor wanted me to at least be on something until the trial started. He prescribed a different injection that is similar to what I was taking before but would hopefully at least get me through. 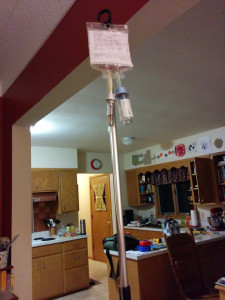 But, there would be a window between when I stopped the pills and when I would start the injections and he didn’t like that. I got the privilege of four days of steroid infusions to tide me over and give me a little boost. The in-home nurse came to me to stick me the first day. After an hour of attempting, she finally called in for reinforcements. Pretty sure all the attempts gave me touch of shock and I was in a not so happy place. When the second nurse didn’t get the needle in on the first try – I asked what other options I had because I wasn’t going through a repeat. I got sent to the ER so they could stick me. Amazingly enough that nurse got it on the first try. Steroids were starting out pretty awesome. They showed me how to actually hook myself up and give myself the infusions. I’m a pro now. During the actual four days it was no big deal so I thought I had it. That was until I was done and the four days worth of steroids decided to make me explode. I was twice my normal size and felt like I would pop if anything sharp got too close. Everything swished and hurt. It was awful but done.

Of course starting the interim meds weren’t easy either. The one the doctor picked was not the one my insurance liked. I had to fill out new forms and try again for basically the same thing but through a different company. Finally the meds came and then I had to coordinate with a nurse to teach me how to administer the drugs. I’ve done injections before and thought this was silly and a waste of time but I played the game. It was actually really nice. The nurse came to my house and sat with me and actually explained what the meds were doing. She had hints and tricks to stabbing myself and helped me walk through the first round. She even called back later to make sure things were going well. This injection, although still stabbing myself, was only three times a week instead of daily. It also didn’t make giant red welts that turn into divots in my body. The only real side effects were achy, flu like symptoms right after but when taken before bed with some ibuprofen, I could sleep through anything.

The trial was finally ready to go and I got the call saying I needed to come in for a day to get everything going. I got to go line by line through the giant pile of paperwork and have a general physical and neurological exam. Then I had to go to the infusion place to donate more blood than should be humanly possible, along with some urine (to really know if I’m not pregnant even though I told them as such.) I had an MRI scheduled and my first date to start things o

n the calendar. I would be randomly put into one of two groups. One would get some vaccines first and then the medicine a few weeks later. The other group would get the vaccines and medicine all on the first day. I wouldn’t know until I got there which group I’d be in.

Then I got a phone call. Apparently my liver was very very angry. The guess is the interim injections were the culprit but they weren’t sure. I was told to stop that medicine immediately. I was also to stop any Tylenol or similar products and alcohol. Two weeks later, mind you over Christmas, I just got to go in for another vial of blood to see if that helped. The good news is that the numbers dropped by half, the bad news is that they must have been really really high because it’s still not enough. I’m still off all of the above until further notice. The hard part is that I don’t qualify for the trial at this stage either. I had to cancel my MRI appointment and my first day I was going to start the trial. Next week I’ll schedule a day in a few weeks to donate more blood in hope of some miracle.

I’m at a really low point right now. I don’t know what will happen if this doesn’t work. I’ve already tried other med options and I’m running out. If I can’t do the trial then I think I’m back to the first options of brain infection and eye melting options. I’m also afraid of the dreaded steroids coming back. I don’t know if I can take that again.

Then there’s the stupid fact that I can’t drink. It sounds stupid because I have never been a big drinker and I recently cut back even further so it’s not even like it should be a big deal. I think it’s more that it’s one more thing taken away. I just want a normal life where I don’t have to worry about little things. I want to be able to have a beverage if I want one. I want to be able to toast the new year with something bubbly with everyone else instead of having water in my cup.

I just want to be normal without the stupid swiss cheese brains and now defunct liver.