So I’ve gone to the new brain doctor twice now. First we just chatted and we both realized how “special” the old one was. The old one did nothing for me, didn’t stay on top of anything, and left me hanging.

I was happy I reached out after the first few minutes of being with the new doctor. He has an awesome demeanor, knows what he’s talking about, and is actually looking out for my well being. He also just happens to be a neuro ophthalmologist… which is good since I have special eyeballs to go with all of my special.

This second round of visits included lots of fun in the MRI tube and then a bunch of eye tests. I know some people have trouble in the MRI but it’s not a big deal for me. It’s actually kind of a nice break from the normal day. I get to listen to music and they have you so strapped in that you can’t move or go anywhere even if you wanted to. I just close my eyes and take a little siesta.

Then I had to do eye tests. This is the actual hard part. I had to look at a light while a red line zoomed around. I kept getting reminded to keep my eye still. Do you know how hard it is to keep your eye still when a line is zooming around in front of it? It’s HARD! I also had to do the test where you keep looking at the middle light. Then all around there are lights or squiggles. You have to click whenever you see something. I get super stressed out about doing this one just at the regular eye doctor. This time it was for 5 minutes for each eye. I still hate that test!
My optic nerves are still fuzzy but overall, the myelin coating is still thick. I get the privilege of doing eye tests every time I go but I guess I can get used to that. I rather like seeing so I’ll put up with it.

My brain holes are either the same as my original scans, or looking better. He seems encouraged by my holes. The big one on the side is still there but way less big. I guess it’s at least going in the right direction.

My neck has no visible holes. It had never been actually looked at so that’s good that it’s in the clear. I had never thought about my neck when thinking about my holey brain.

I never thought about my spinal cord either. Unfortunately, that result wasn’t as great. I am the lucky winner of quite a few holes in my spine. We can’t know if they’ve always been there or if they are new and upcoming. The doc thinks that they probably have been around but that we now get to watch closely. I get to have MRI’s of the whole she-bang more often and that may have to alter my drugs next time around. 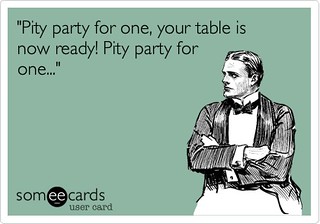 I guess I’ll sit at my table for one for a little while well everything sinks in and then we’ll figure out how to move forward.  Holey brains are kind of sucky.  Holey spines are even more sucky!