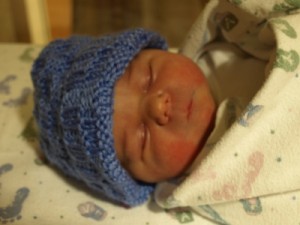 The girls at work were very sweet and threw a shower for Thomas.  We went to Las Margaritas in Woodbury.  There was lots of fun had by all and Thomas got lots of great clothing, diapers, and toys.  He’ll be all set if he ever decides to come out.  Peter also got some gifts.  He was so very excited to get a whole stack of Diego books.  Dustin may not be quite as excited after reading them, one after another, again and again.  Peter also got a fireman hat and coat.  He wasn’t sure at first and then figured out what they were and put them on, running around the house with the “really loud” siren. 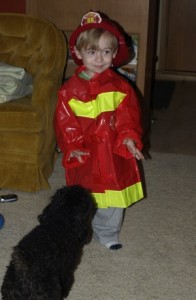 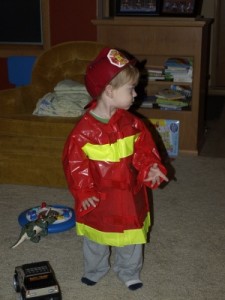 This morning we woke up to a white outside.  Peter went to the window and yelled “SNOWIN!”  I wasn’t sure if he’d even remember what that white stuff was but he was excited.  We decided we should go outside and explore in said snow.  I showed Peter that you have to wear all the winter gear and he wasn’t too sure.  I put on my boots and pulled out my hat and mittens.  That helped but he was really mad when I tried to put his snow pants on.  He already had pants and I’m sure he thought I was crazy for giving him two at once.  We worked through though and got him all bundled.  The poor kid waddled to the door but was very ready to bust outside.  He ran, threw snowballs, was much to busy stomping to look at the camera, and even used his little slide.  Peter officially loves snow! 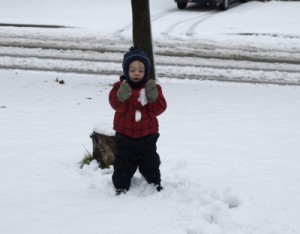 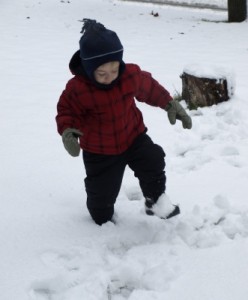 Oh, and still no baby yet… in case you were wondering