The results of the spinal tap are in. I have a demyelization disease. The spot in my brain is not just swiss cheese, it’s actually something. 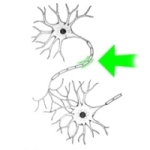 The brain is made up of neurons firing electrical signals back and forth. Myelin is a coating that helps the signal get to where it’s going without being corrupted or interrupted.

In my head, my body attacks the healthy myelin. The result is the lesion and dots they found on the right side of my brain. As of now, that’s all it is. Down the road it could be more though.

Multiple sclerosis is the main disease dealing with myelin in the brain. Usually someone has a neurological event first, meaning something goes wonky for multiple hours. Their speech could be slurred, a limb might stop working right, or anything random like that. After two or more of these events, then they would officially say multiple sclerosis is in play. The doctor said that most people are in their 20’s when the disease starts without them knowing. Usually someone with MS would have at least two events and then go in and find some lesions. I may have just accidentally done it the other way around

I go in a little while for a second MRI to see how the lesion and my brain are doing. Then I’ll go back to my brain doctor and talk about where to go from here. We’ll talk about which MS medicine I will start taking and get a game plan. The medicine will hopefully either stop any neurological events from happening or at least lessen or slow them down.

It’s a lot to take in but I’ve had a little time to process and I’m doing okay. It’s not the news I wanted to hear but at least it’s something to go forward with. At least I’ll be proactive with the medicine and I’ll know what’s going on if something stops working. It will be okay.

I guess we will just start to support the MS 150. I don’t remember the last time I actually rode a bike to actually participate but if we have any bike riders in the crowd, this would be a good thing to try.