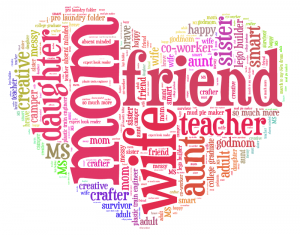 As I step over little boy undies, trains, and legos all over the floor to change the channel from a cartoon that had been on for a few minutes already (mind you the boys aren’t actually here now) I had to reflect.  If you would have asked me 20 years ago, or even 10 for that matter, I don’t know that I would have predicted that I’d be here.  I thought I’d know more or have accomplished more.  That’s not to say that I’m very happy with the life I live.

When I was little I wanted to be a ballerina with big boobs.  Someone probably should have told me that I have no grace and that those two things don’t exactly go together.  I think I did fairly well in school.  In high school I pretty much went with the flow and lucked out by having awesome (and smart) friends.  In college I learned a lot about myself through little steps, big jumps, and a few stumbles along the way.  In all honesty, I picked my major because I had to finally decide or I wouldn’t graduate on time.  I had the most credits toward psychology so I went with it.  It had to lead somewhere, right?

I never really came up with a better answer to what I want to be when I grow up.  The list is long on what I thought I might do.  Although I was surprised each time I was actually chosen, I’ve had different jobs that each taught me different lessons.  I’ve had good times and learned what I don’t want to do in the process.  I don’t know if this will be the be all and end all job now but I can say that I really do love my job now.  Working with those little people is refreshing and rewarding.

So as I look around, I realize that I don’t know that much and I haven’t done it all yet but I wouldn’t trade this for anything.  I know that who I am is based on the things I’ve done and experienced.  I’m proud that I am a mom, wife, daughter, friend, sister, aunt, godmom, teacher, co-worker, lego builder, plastic train engineer, college graduate, pro laundry folder, crafter, expert book reader, and so much more.  I’m me and that’s all I can ask for.