We haven’t taken many pictures this month.  We really haven’t done much this month.  It’s been hot and I’m feeling kind of huge.

Peter has really been into books this summer.  He would read them over and over and over if he could.  Normally just looking at the pictures isn’t enough though.  He wants you to read to him but he isn’t always patient enough to actually listen to the story.  He has a big book full of different trucks.  He gets excited to read the “giant truck story.”  There’s really not much of a story but we get to point out each vehicle.  The other day he actually took the book to the floor to “read” it on his own.  It was too cute. 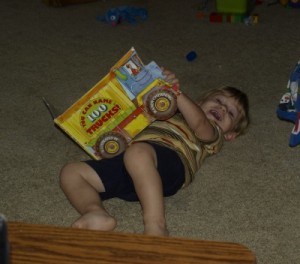 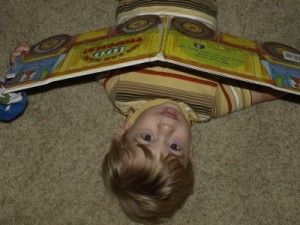 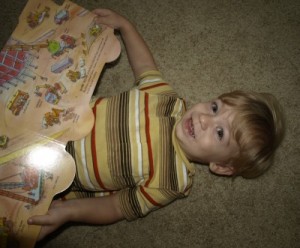 Because I’m feeling slightly huge, everything takes a little longer than usual.  The laundry has become my enemy.  I don’t mind actually washing it but then you have to do something with it and that’s the part that gets me.  I was really trying to be good and had a pile of shirts on the back of the couch that just needed to be put in the closet.  Unfortunately, even the dog has picked up on my slowness and made herself right at home on the top of the back of the couch right in with the shirts.  We had a mountain goat for a long while. 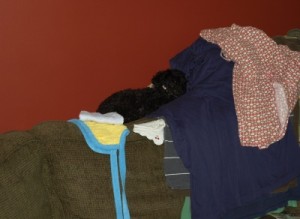 This has been a hard pregnancy.  There hasn’t been anything major but all the little stuff adds up.  I laugh that it’s a good thing this is round two or Peter would never have gotten a sibling.  The good part is that we officially know that this little baby is a boy!  He didn’t cooperate when we did the ultrasound at 20 weeks with the doctor.  All we found out was that it was a healthy baby.  Well that wasn’t good enough for me so we went to a private place and he saw right away!  I had to go in and drink the icky orange drink and with everything else, I kind of just assumed I would fail the 1 hour test.  Amazingly I passed.  Maybe things are looking up.

So now I have it in my head that I should get working on Christmas stockings.  I started Peter’s last summer and never finished.  It has become my goal to have a completed stocking for both boys by this Christmas.  I can do it!  I cross stitched Peter’s name for the top and a snowman to put in the middle.  The big goal now is to find a nice picture that has a similar feel for the second but isn’t just a repeat of the first.  I at least started mapping out the name to go on top.  I think it matches pretty good and looks mostly even.  I guess we’ll see once I actually get going.  Here’s the paper version with Peter’s name how I already stitched it and Thomas on top with how I think I’ll stitch. 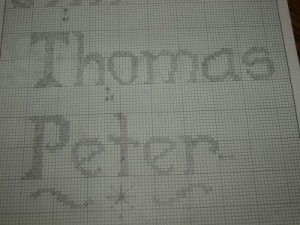